The Making of Tron: Legacy HD

I really enjoyed this film. Disney has allowed the Tron DVD to go out of print. I'm guessing they're going to release it along side Tron: Legacy. Perhaps even as a Blu-Ray combo pack.

I have to say though, that I was kind of disappointed in Digital Domain's work on Clu and the younger Flynn. They did a much better job on The Curious Case of Benjamin Button and that came out in 2008. They paid much more attention to the subtleties and nuance of human expression in Button than they appeared to have on Tron and they used basically the same techniques and technology.

I was pleasantly surprised by Cillian Murphy's uncredited performance as Edward Dillinger Jr. Edward Dillinger Sr. was the main antagonist in the original Tron. The ambiguity of the fate of the Tron program certainly leaves the possibility open for a another sequel. I wouldn't mind seeing a showdown between Sam, Quorra, Tron and whatever avatar or program is used by Dillinger--and portrayed by Murphy of course. I'm reasonably sure they could find a way to resurrect Kevin Flynn as well.
Posted by Joseph L. Puente at 12:13 AM No comments:

So, I watched the marathon run of the last five episodes of Caprica and I have to say... I want more! The Syfy network has got to make money, I get that. And Caprica apparently wasn't profitable enough for them. What I find most sad about this is the fact that the more profitable a TV show is, the less likely it is to be viewed by an intelligent audience that can discern quality from fluff.

Some of the complaints about Caprica that I've read have concerned the fact that it is so much different from Battlestar Gallactica. What's ironic about that statement is that most people knew that going in. It wasn't a surprise. From its very inception, it was compared more to episodic soap operas like Dallas than to BSG. There were also complaints that there wasn't enough action and not enough Cylons. Well there certainly were a lot more Cylons in season 1.5 than there were in season 1. Who's to say that we wouldn't see more Cylons if Caprica wasn't cancelled?

I think Caprica should be given at least a second season to make up for any perceived shortcomings of the first. Seasons 1-1.5 were essentially prologue. In light of its cancelation, they could be viewed as prologue to BSG--or even Blood and Chrome--but I prefer to see it as prologue to a much more dynamic and engaging set of story-lines that could be explored in at least one more season of the show.

Of the final episodes, I was very pleased to see some key issues resolved--even a few trivial ones. We got to see Daniel figure out how to survive his deal with the Guatrau as well as the transfer of power within the Ha'la'tha, evocative of our most favorite mafia films and TV shows. We even saw some reconciliation between the Zoe avatar and the Graystones. Lacy Rand's future is in less doubt but open to some intriguing exploration were it not for Syfy's bean-counters trumping any creative will that might still exist at the network. There's even a plausible explanation for why followers of Surge on Twitter won't be hearing from him anymore. They even resolved the minor discrepancy in continuity regarding the eye color of young Willie Adama (Sina Najafi) and Commander William Adama (Edward James Olmos) in BSG.

The most important question that I had since I first saw the pilot/mini-series for Battlestar Gallactica was even partially answered: How do a bunch of robots find religion? Throughout the first season of Caprica I figured it was some trace of the Zoe avatar left behind in the MCP of that first U-87--yes, if you haven't seen the show, you probably have no idea what that last string of words even means; maybe if you watched the show it wouldn't have been canceled! ;)--while my mind is open to the possibility that that may indeed have been a factor, the closing images of Sister Clarice preaching to Cylons in a church was even more compelling. The idea of these "tools," as Daniel Graystone describes them, having free time and using it to find religion is very compelling and something that I have not seen explored in popular science fiction before. Data on Star Trek seemed too preoccupied with finding his humanity to be bothered by religion. There are no droids among the Jedi. But eventually, Cylons commune with angels.

Oh, Caprica, I am going to miss you! But I hope that the producers of Blood and Chrome--while appealing to the popular desire for more guns, robots and explosions--won't pass up on opportunities to explore more of the spiritual elements that I've really come to appreciate throughout the re-imagined BSG universe. Some flashbacks to the Graystones, Clarice and Lacy perhaps? We'll see.
Posted by Joseph L. Puente at 1:38 PM 1 comment:

I studied advertising in college, especially television advertising. I've gone on to write copy and produce a few commercials over the years.

One of the most iconic ad campaigns of my youth was Procter & Gamble's "Don't Squeeze the Charmin" campaign featuring the funny grocery store manager Mr. Whipple portrayed by veteran actor Riccardo DiGuglielmo--better known by his easier to remember but oddly mundane-sounding screen credit Dick Wilson--from 1964 to 1985.

One of my favorite ad campaigns of the 2000s is also by P&G for their Charmin toilet paper brand. Featuring, of all things, BEARS! But not the scary kind that Stephen Colbert is always warning us about.

I remember when I first saw the ad and I thought, "Okay, low-tech cell animation. Cute cartoon bears. Whatever." Then I realized what the bears were doing and where and I thought, "Genius!" It's a play on the old joke that you tell whenever someone doubts the validity of what you just said, "Am I serious? Is the Pope Catholic? Does a bear shit in the woods?" The unspoken and obvious answer to both questions being, Yes! Oh, what I would have given to be in the pitch meeting when someone came up with that idea. It has a certain sophistication for being, essentially, a poop joke but it's completely apropos for a product such as Charmin toilet paper.

As of this writing, the ad campaign has been running since 2000 and isn't just on TV. I was playing an ad-supported game on my iPhone recently and was treated to a short commercial. I usually tap on the "skip" button on these but since it was one of my favorite campaigns, I went ahead and watched it. It featured P&G's "Enjoy the Go" campaign--started in 2009--in which they are inviting people to submit videos--don't get ahead of me, please!--to a YouTube channel explaining why Charmin helps them to "Enjoy the Go." There was also a "Go Nation" contest, a Facebook page, an iPhone app that can direct you to a Charmin approved public restroom--similar to George Costanza's iToilet app, I'm sure--and something that every ad campaign hopes for: celebrity endorsements.

Which reminds me that people will endorse just about anything as long as there's a check involved. Who were the celebrities tapped to endorse the "Enjoy the Go" campaign? 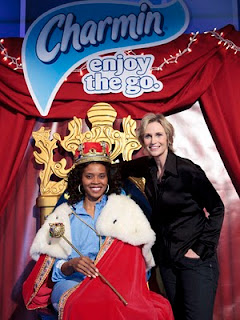 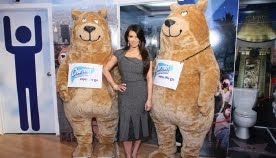 Don't get me wrong, I still love the ad campaign. It just goes to show you how a successful campaign--this is a $1 Billion a year brand--can go to some very weird places. Were it not for Charmin' I never would have pictured either Jane Lynch or Kim Kardashian going to the bathroom, though I'm sure others with strangers obsessions imagined that very thing a long time ago.
Posted by Joseph L. Puente at 10:39 PM No comments: